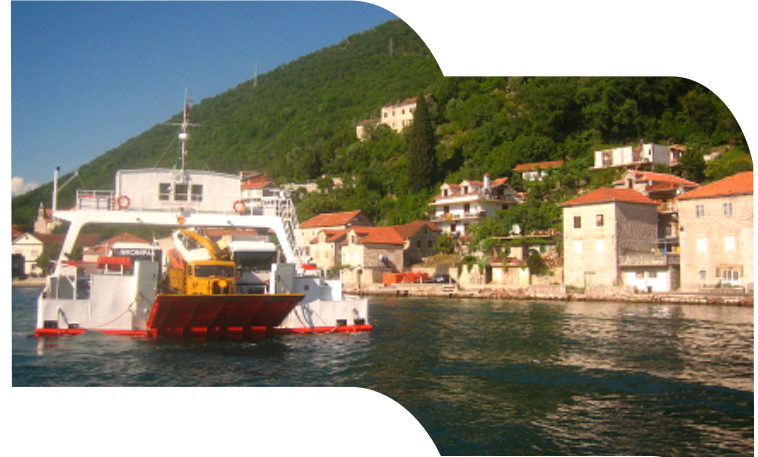 Day tours to Montenegro are touted in many agencies but a casual pass on the Lapad waterfront in Dubrovnik at a path side tented agency brought forth a casual sales pitch that proved to be the enticement to book tomorrow’s trip. The daily tour was the same DAS Turist Agency tour sold at the Pile gate Info Office but at a saving of 60 Kuna and the transport varies according to the number going either 4 passengers in a Peugeot 605 or if more a mini bus. Atlas Tours also advertise a trip but does not go everyday so it is all aboard with the ubiquitous Mr Vladimir and an 8am lift off from the Hilton Hotel the predetermined pickup place.

Today’s play in the Tour De Kotor stakes was an effort due to there only being 4 starters but the extra two were two non English speaking “sauerkrauts’ in the guise of Bernard and Heinz. The backseat gymnastics to fit the bigarexic juggernauts, black sox and sandaled into the backseat with one small Australian wife required a degree in vocational science. The tight torts were not the only problem on the 3 hour trip to Kotor as the temperature was a hot and stuffy 27 C without the upcoming border fiasco. The Montenegrin border is a 250 meter passage past the Croatian checkpoint past four duty-free stores leading to a frustrating 35 minute wait as the vehicles stacked into two lines. The only repartee was now with our Driver Josip who pointed out where the Serbian and Montenegrin troops had mined the valley and decimated the country side during the Balkan Wars. The Croatian people had their cattle and lively hoods taken and the driver’s village decimated during the conflict but he needed the 6 months work the Tourist driving gave him so he put up with the current situation stoically. He commutes 2.5 hours from his village to Dubrovnik to drive and when the season finishes returns to sheep raising until the next year. 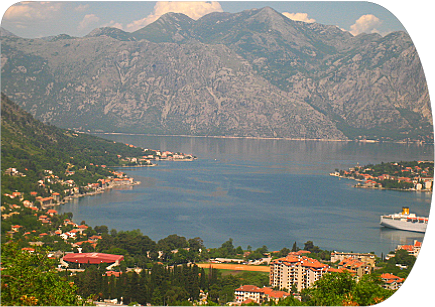 Montenegro has borders with Bosnia-Herzegovina, Serbia, Croatia, Albania and the Adriatic and the capital Podgorica has the apt English translation of ‘under the Trees’. The roads are manageable but the pace is slow amidst the Trabant like Yugo cars, ancient Serbian trucks of nefarious vintage and the omnipresent Polizia. The predominance of Montenegrins finest is explained by Josip with relative indifference because corrupt fine collection is an endemic fact of life so why would there not be plenty of them. Soon the outlet to the coast is reached and the standard of construction and life in general lifts revealing the southern most fjords in the northern hemisphere.

The fully fledged Fjord has tumbling cliffs and is a picturesque framework to play traffic dodgems around the perimeter. The mayhem of Kotor looms with the parking of a large cruise ship butting against the roadway alongside the village wall. The new European tribes playing cruise boat crunchola poured off the boat streaming into the narrow ancient gates and passageways in what verges on a guided rabble. 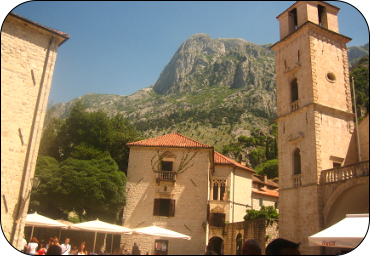 This bad timing crowd wise impacted at the ATMs with the financial system sucked dry for Montenegro had declared the Euro as currency ,even though not part of the European Union, as a sign of Serbian separation. The spectacle of spending time jostling the elephantine terror tourists took some gloss of what is a pert example of a walled enclave climbing to hilltop fort but the crowds led to a strategic retreat. Kotor has had a chequered career from Romans, Saracens, Serbians, to Bulgar’s Venetians and Austrians but the most damage has been through an earthquake in 1979. The Venetians had a dynastic period from1420 to 1790 and the remanent town is largely of a baroque style due to this influence leading to protection under UNESCO world patrimony.

The motor from Kotor pressed hard toward the town of Budva the oldest settlement on the Adriatic hosting Greek and Roman beginnings but nurtured and again cultured during 400 years of Venetian rule. The major stop is to eat lunch and the revelation that the tour stops at the same restaurant, a particular Café Porto restaurant, alerted the rip-off radar and sent it spinning into overdrive. The scepticism of Tourist fare was immediately alleviated by both the cheapness and fresh quality of the seafood that was promptly served. Fresh mussels, fish soup, tomato soup, fish risotto, bread and cream cheese under the grill, and the house vino verging on 9 out of ten a bargain at the princely sum of E22 a couple. 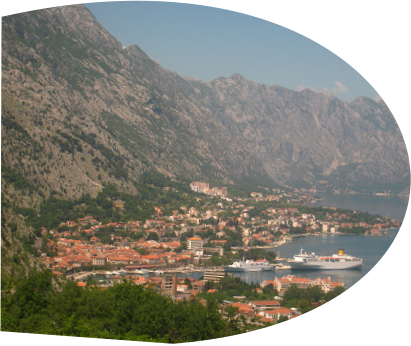 Roadway entry into Budva is nondescript, hidden behind pallid architecture, but driving to the jetty soon reveals a different picture as the old town fuses into the waterfront. From a distance the old town Budva is almost like a Hollywood neo-kitsch village set in the Principality of Yachts. Questions reveal that this is a favourite playground of the mega wealthy Russians, rich in petrodollars, going into overdrive in the search for sea, apartments and holidays. There is a sense of largess in the guise of leviathan luxury cruisers incongruously providing the modern framework for the old town gates. The floating palaces are not quite on the scale of Dubai but with pristine waters and an oligarch tossing funds at the monster Hotel Splendid perhaps there is some competition. A walk through the old town reveals cleanliness ,shops of designer chic, a sense of pride in the purity of presentation but the enduring opulence an overt measure of wealth lay bobbing at the stonewalls. Heading out of Budva for 8 kilometres the exclusive area of Seveti Stefan is the outer extremity of the tour and another chance for photos and photosynthesis as the beach umbrellas shade the shores. This halt is a chance to visit San Stefan the road access island enclave of 20 residences now the favoured retreat of the new Montenegrin President and other wealthy technocrats. The beach is a favoured bathing place fringed by manicured lawns but has a light shingle coating as the small Montenegrin coastal access has little sand due to the rubble from broken down cliffs being the major component.

Return to Dubrovnik is via the same route but to save driving around the whole bay again a short 10 minute ferry across prior to Kotor cuts a large repeat journey and after a busy 11 hours the ejecting border is quick now that the Euros have evaporated. 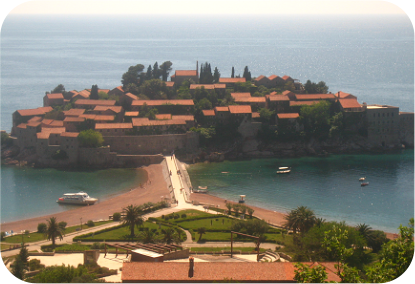 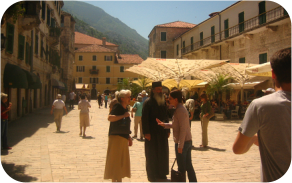 Castles – made in Essaouria – Circa J Hendrix