Liberation Day for the Italians has some resonance in Australia’s ANZAC day WWI as both are celebrated on the same day as the Sichiliano journey progressed to Syracuse. The Sicilian hordes  had descended on Taormina making exit along Corso Umberto an exercise in indifference as stepping aside for a cab was not factored into the days planning. Giardini station is empty and the salvation of 1st Class seats at a cheap E15 does much to help to spread the feast of cheeses and vino onto spacious tables and settle in to hit Syracuse.

The countryside is more interesting after Catania with many abandoned dwellings among mandarin groves alongside veritable Romanesque ancient structures that give an almost occupied look.

The entry into Syracuse is a veritable industrial wasteland of the worst excesses of the Italian rebirth but entry to Ortygia Island gives impressions of old Londonium. Buildings look broken down, dusty, crowded and pastel but the character is oozing out waiting to be given a severe case of terminal tourism. 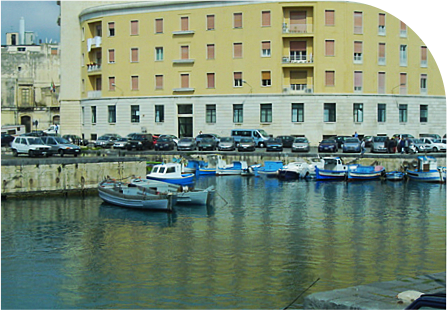 The apartment was selected deliberately to be on the Island of Ortygia as the
crucible of Grecian settlement and the domestic instructions for its use soon
belie the torture of living with history. Yes we have a brown-out as the
sewerage system cannot keep up with the paper parts of ablutions so it has to
be kept in bins and seemingly haphazardly dropped into any dumpster handy.

Wonder if instructions are the same in the Five Star Hotels? A small inconvenience as orientation commences by walking into the
Apollo Piazza along Via Liberation via a tight torte of alleys threading through buildings at varying states of disrepair shared with one car passage. The flats and residences were of a semi baroque style but reconstruction of many seemed at a slow pace and the human detritus of daily wear and tear touts a threadbare look.

Apollo theatre ruins and the Piazza had an ancient aura as the sport of evening parade commenced amongst stalls and cafes as the holiday crowd chewed their way onto the footpaths at holiday pace. The shopping areas were not as concentrated as other Italian hotspots but the incongruity of Prada outlets and major department stores was a strange retail mix interspersed amid the local haunts.

History had its roots in this area as the island of Sicily has been ruled by more conquerors than any other island. Sirucans were the originals ,Greeks arrived, built, integrated and fought among themselves with their own Hellenic wars ,Rome was motivated by the Syracuse’s siding with the Carthaginians so desired to conquer and punish ,the Vandals so aptly named lined up ,Normans were next with buildings that are still iconic today ,the Arabs of the 8th Century ,French ,Spanish ,German ,and English all parked here so no wonder the remains resemble no predominant dynasty other than the well represented Baroque period. Modern period remains have intrinsic beauty, great topography, location on the perfect island a scene crowded and packaged into the emergence of Sicilian tourism which has abrogated the mayhem and murder of State and mafia.

The Archimedes Principality is a good signature name for Syracuse as the great man was born here in 287 BC, studied in Greece and returned before the Roman capture. He planned the defence of the island which the Romans took 2 years of siege to crack and the Roman commander Marcellus issued orders to spare Archimedes but alas a soldier’s sword killed the world’s foremost mathematician. His burial site was lost in the days of early conquest but Cicero who described Syracuse as the “Greatest Greek City and the most beautiful of them all” …150 years later ordered the tomb found and he is buried by the Agrigentine gate.

Wandering the 1km length by 500 meters width of Ortygia is an easy day’s orientation as the tight streets release sea views, small pizzas and a long seaside promenade with boats of all nations berthed at its edges. In the centre are the remains of the Apollo theatre as it competes with modern day hazards of cars and people but life goes in around it as the espresso bars and cafes ply
their trade. The persona of the place goes through a metamorphosis from the day into night as movement stirs after siesta reigniting the heart as it beats alive for the evening repast. The picture perfect piazza of the duomo with the nights strategic lighting creates a fairy fantasy and the creative never ending Italian passigiata is different here as canines integrate into the procession with the residual “barkers eggs” bespangling the pavements.

Today is Antiquity day and the beginning is not a mind sapping organisational event as the walk over the Ortygia Bridge steers one up Umberto to the Madonna Della Lacrine the ultimate in craven imagery of beatified baloney. The large conical structure houses some mass produced statue that supposedly wept in 1953 so why not house it in an over the top architectural, arcoustic mess and over indulge the phenomena. The front door receives the spiritually psyclobined adherents by the coach load and services of ecclesiastical excrement churns incessantly to the brainwashed minions. An opportunity to unload trinkets of religious crassness means one can never underestimate the bad taste of the worshipping public undoubtedly the pap of papal priaprism. 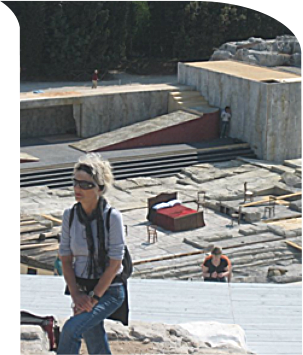 Next stop the Museo for the real antiquities covering the periods of early settlement all laid out in a never ending rich assortment a veritable treasure trove that fulfilled any scholars dream. The sculptures open to examination but not to photography rivalled the legendary love of the Louvre and the Venus de Milo has a sister.

One needs to resuscitate the soul whilst chewing the ruins and traipsing the tombs as there is only so much archaeological material that can be assimilated on a hot day. A certain degree of scepticism floating in the air after the Madonna mayhem and a sacramental offering of vino Rossi locale is a haven from the trauma. Revival after the libation settles the discovery gene and recharges the historical veins as the holy grail of tombs and the Father of all things Syracuse the Parco Archeologico beckons. The sheer limestone cuttings and foreboding nature of the leading pathways into the Parco opens the soul to the imagined privations of the slaves that had hewn this site. The walkways lead into the massive opening of Dionysius ear that were jail, work and home in the internal caverns that are so large that the ceilings can barely be seen. The Athenians provided the labour when they sent the largest pre-Christian era armada to subjugate the Siracusans and suffered a huge defeat and most were captured to spend 7 years cutting the future fortifications for the resistance of Syracuse. Further into the Parco the Teatro Greco was being prepared for a month long performance of Greek tragedies so the false decorative material took away the effect of age and character but the outline was immense.

The ubiquitous trinket venders lining the entry and many tour coaches make it imperative to be there early to escape the push. The notable image of Syracuse registers only five out of ten on the visiting register due to the mass of, litter, dog crap and general dirt but the Antiquities and scenery is here in bucket loads but without the civic pride.

No trip here is complete without going to Noto and the Interbus terminal on the island provides easy access via Avola through the countryside soon reached in 50 minutes. The 1693 earthquake decimated the town and a complete Baroque style “new town” in consultation with the leading Italian architects was commenced within a week and completed in astonishing time for the era.

One enters the town through the gate Via Porta Reale which leads straight up Corso Vittorio Emanuel past the most beautiful building in the whole of Italy. The Twin towered Noto Duomo has its façade exposed for the first time in generations and could be termed the Sicilian Taj Mahal. 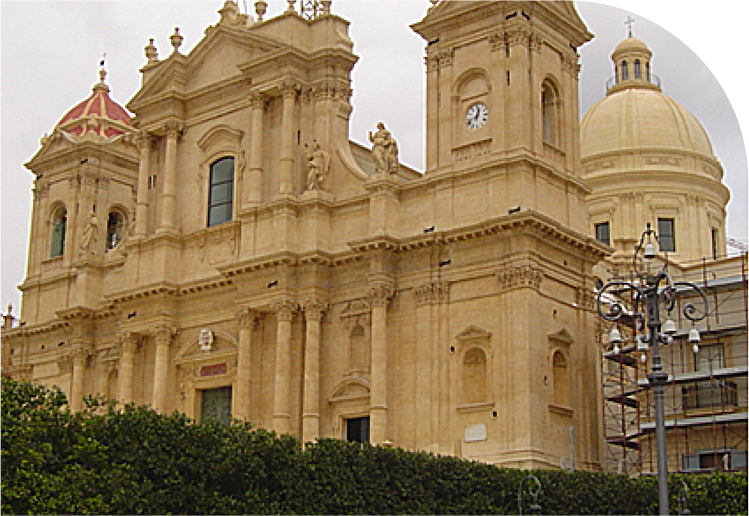 Dubbed the stone garden Noto is made from the honey coloured soft Tufa stone used in the rebuilding of the new town, with buildings like the Ducesio Palace, now the town hall, or the Church of Charles Borromeo just adding lustre to this UNESCO heritage listed town.

The stopover and wander through the contrived grid of town planning takes you past baroque dwellings and the symmetry of revival gives a distinct division of areas for religious and political establishments and sculptured dwellings of the town folk.

Without going into icon overload the pleasantries of Noto are enhanced by the accessibility of good eating a la Cuchina Rustica and the legendary ices and pastries are foisted into the medulla oblongata by the persuasive presentations lurking in the exposed shopfronts.

The photo opportunities are only limited by card size and every person can take away an individual experience that will be replicated in every trip story as “this is a must visit town”.