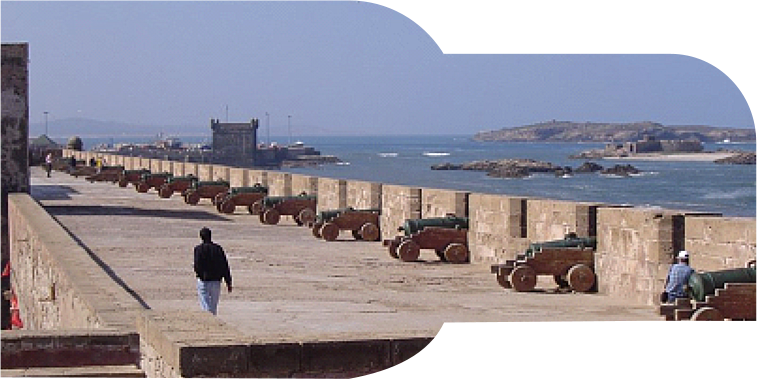 Grabbing a petite taxi in the Siddi Moumoun area of the Marrakech Medina early morning to Gerliz requires hard bargaining Morocco style as 2 cabs are needed with four lots of baggage to get to Supra Tours bus station. 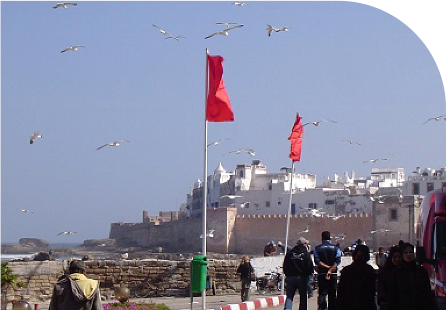 Warnings were heeded to book a day before on this busy connection as only 2 seats were spare for the $9 three hour trip to Essaouira. The trip is uninspiring in the first hour passing through olive groves spiked amid the lunar landscape with stone or mud walls separating lonely settlements. In godforsaken nondescript places signs proclaim a forthcoming residential development in what must be the most optimistic punt in Africa. Moroccan flags wavered at any modicum of habitation seemingly presenting a cult like obeisance but explanations the King was on the way to Essaouira put the fluttering into perspective. A stop for halfway watering is the first influence of the Atlantic and the sheep and goats seem to recognise the appearance of grass with docile taciturnity. At any vending point, no matter how small ,the loitering of men seems to be the national sport as barely a glance is elicited to interrupt the important tea slurping, handholding and clouds of smoke.

Essaouira appears through the sand hills with the pale silhouette taking up the skyline and from a distance looks the archetypical whitewashed Spanish or Legionnaire image of storybooks. The bus pulls up out side the walls without fanfare or announcement and there is a general hustle as the barrow boys gather to badger the passengers for baggage cartage into the vehicle free Medina and souk.

Traipsing into the maze of passageways on a search and rescue mission to find Villa Garrance accommodation using undecipherable maps, speaking bad pidgin-French in an untranslatable fashion certainly shortens the synapse. The Villa inside the medina is a cross between hotel and boarding house with 10 rooms on four layers with an internal opening to a glass topped dome. Two French and Swiss girls run the place with a mix of Moroccans, a majority French clientele and meals can be taken on the topmost terrace with views over the whitewashed terraces to a glimpse of ocean.  The Villa has an intrinsic charm and ample space at E65 per room but the common ailment of noise intrusion assures an early rising. 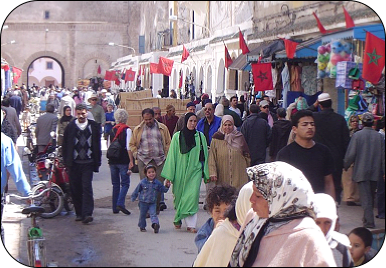 The essence of Essa in deference to Marrakech is that it elaxes the soul at inception and the vendor hassle gene has been replaced with a humorous banter of laidback salesmanship. The Medina is far cleaner and the tight passages are not competing with the pedestrian dodgems cyclo-mania of the Marrakesh souk. The Medulla carries on its trade in the open air and even the flies seem cleaner as the saw pits of open butchery chop their way through good looking carcasses and camel fetlocks amid the jostle of both locals and tourists.

General merchandise is gaudily displayed on the sidewalks with most goods being cheaper than Marrakech and lack of harassment allows a more languid and controlled wallet massage. Small eating establishments verge out into the passages reaching a peak in Moulay Hassan the main gathering space at the port. Any brochure or web travel advice espouses the great value of visiting the fish markets to bargain with the eating shacks so the fresh seafood can be grilled on the spot.

Unfortunately the legend and its simplicity is better left on paper as the prices have risen and the flavour of the Lobster, crab, scampi, whole fish and fillets took on the carcinogenic taint of sameness as the grills crucified the offering. Good restaurants with expansive views over the area with cold beer and good wines sport reasonable prices and international standards prevail in Taros and Bab Laachour proving the most hygienic examples. Tourist traffic and cheap airfares makes easy holidaying access in a Muslim country to sit in a relaxed atmosphere and sip a cold European beer or vino whilst contemplating the next calorific attack.

Today’s fishermen use the same openings in the ancient remains of the port and at least a hundred small boats ply the fish trade that is a tourist drawcard. Seagulls crossed with vultures perform kamikaze manoeuvres picking up guts and leftovers in a guano bombing run scattering the shutter buggers. 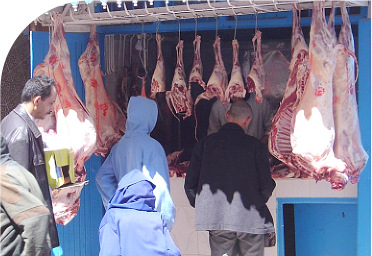 If any claim of rock fame exists then the fable of Jimmi Hendrix and his alleged writing of Castles Made in Sand bares credence when looking over the walls and spying a castle nestling ever so close on a sandy enclave. It is understandable that the romance is easily believed as a history of Portuguese fort building and Moroccan culture is tied up in the town called the home of wind surfing. The fort is in good repair with bronze cannons, inscriptions on the barrels from 1600 to 1700, peering out over the Island where Sir Walter Raleigh victualled while on his way down the African Coast circa 1550. The stalls and merchants have turned the arches of the old fort wall into galleries and workplaces creating a balanced style of artistic charms that verge on designer chic. The tourist trade from France seems to have ingratiated its wants into these productions and the Parisian style emerges as the major influence.

The night moves of locals and tourists gathers steam as all head to Moulay Hassan fuelling the gyrating and swaying as the Gnawa Drummers fill the large square. Noise reverberates across the harbour but the syncopated hammering amplified across the well patronised space was a little less harmonious than expected. Every family seemed to have brought the kids treating them to a happy night out with an alcohol free environment perhaps a very tame offering in comparison to Australian performances. The charm of these gatherings lies in the seamless insouciance that tourism does not control or enter into the essential Essaouira lifestyle.

Behold the kiss of death entered the fray as a waxing moon and dreamtime hammering was interrupted by a power outage as crowd greeted it in a crescendo of catcalls and whistling. The concert stopped and the crowd dispersed into the alleys as candles tried to put a glimmer of light into the dark shadows. The climb up the steep stairways of Villa Garrance was a fairyland of four floors and it seemed a small inconvenience.

The next morning with no power and sub Antarctic shower conditions prevailing enquiries revealed a Moroccan dilemma. The King and his entourage arrive into town to get close to the people, plug the Palace in and suck the grid into submission. The Royal visit deteriorated into cold showers and candles ensuring the talk of hot showers became the cause celebre plus remarks alluding to the concubinary and sufficient power for the harem toys? 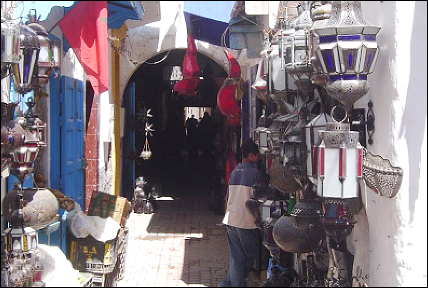 No electricity is needed for power shopping and a blitzkrieg of bargain battering determines a trawl through the souk for trinkets of arrangement for both progeny and relatives. Scarfs, rings, exotic cloths, bangles, leather shoes and minor critter reproductions dominated as the vendors succumbed to a beating over minor dollars. This tourist pentathlon is an exhausting sport for grown men requiring frequent café co-ordination in an environment of superb taste testing to assuage the proffering of meaningless opinion. Alternatives to town is a hike down Essaouira beach to Cap Sim crossing the River Ksab making your way past the Castle in the Sand and from there the beach stretches all the way to the light house. On the way you pass a couple of small fishing villages reminding you that people are still happy to live out in the sticks.

The beach ends past the lighthouse but following the trail along the coast leads to “The Cave” a very popular windsurfing spot. Exiting the area is to follow the trail inland to the main highway to complete a circumnavigation or continue along the coast to Sidi Kaouki.

Leaving Essaouira without replicating the Marrakech route required negotiation by the proprietors as the journey to Casablanca along the coast is over 5 hours and a Grande Taxi was arranged. A fee of 1200 Dirham’s ($200) for 4 persons in a 25 year old 250D Mercedes seemed a risky conveyance but a worthy experience as the driver spoke some English. Four large bags were strapped in the boot, one bag acting as a counter balance and any trepidation by the female passengers evaporated as the competency, comfort and ease of the driver emerged.

The route via Safi took on the guise of a Sergio Leone search for a spaghetti western set as the greyness, desolation, degradation and barren ground was never ending. The rural poverty is pervasive and roadside men loll about in godforsaken, dusty shanty towns in a never ending parade. Donkeys are tethered in bare patches by their two front feet to thwart wandering in a topography designed by a prophet of gloom. 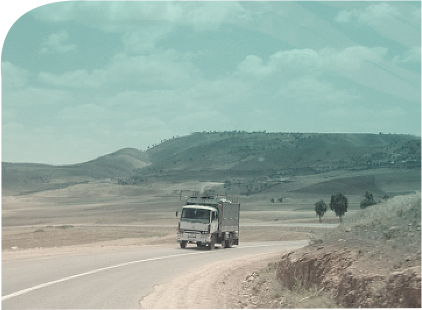 A stop at Safi for lunch (“End of Finish” in Arabic) is apt terminology for a phosphate port surrounded by cliffs, dirt, filth, haze, and rubbish offering nothing visually to entice a stopover.

An interesting lunch in a Mac-tagine restaurant brought the swiftest, smiling and most prompt service in the whole of Morocco at a set price of 50 Dhms inclusive of beef and vegetable tagines served a-la-American style with large salad and fries.

The route from Safi passes yet another Kings Palace along towering cliff tops and escarpments not unlike the Australian Bight but blighted by Italianate Villas atop the exposed rock bare soil. The grotesque locked mansions perched lonely facing the elements without intrinsic beauty acting as monuments to largess and bad taste.

The road forward has little else to perk the soul other than the frequent military roadblocks which were explained away as ‘ looking for the ladies with the beards ‘which accounted for the 10 suicide bombers loose in the country.

No major settlements broke the journey and the interesting places became an English Banks holiday Resort at Qualwadi and a drinks diversion into El Jebbidah showing off the tidiest town of any note. All prior exhortations to avoid the need to go to Sam’s bar proved correct as Casablanca emerged a tortured tribute to an overpopulated metropolis and is worthy only as an overnight exit port.

Evacuation Stresa meant we could not escape the hearty goodbyes and the night’s infusion of bon voyage blueberry grappa did not help the Methode extractionaire to Malpensa Airport the next morning. The whole hotel turned out to watch the car on an Atkins diet trim its “ears” on the tight walls as the nuances of ancient buildings impacted on the curse of modern conveyancing.

The largos give the European flavour to Italy and the pace is of a more mature, decadent lifestyle in antithesis to the walled village simplicity throughout the southern sectors.

A Personal Tour of Barga