The menace in Venice is mainly on the trains but the best surprise on arrival is being nudged by the human backwash as they press one onwards to finally exiting Santa Lucia Station almost onto the main canal. Time to enter negotiations on a water taxi for the four terror tourists, replete with heavy bags, desperate to get to San Marco leaving little or no bargaining stakes for monetary movement. The inviolate fee is E60 for a 20minute commute in a mahogany veneered launch with the aptly named Fabio representing the archetypical Italio lothario incarnate. The evening ride is too short to suck in the ambient flavours as the sheer weight of what loomed at either side seemed to flash by so quickly. 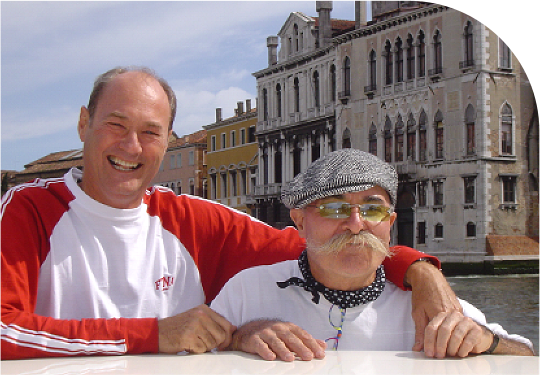 Arrival at the San Marco jetty side means a short trip to the 2 bedroom apartment and the crusty bits from the long train trip from Rome soon vanished. Instructions for rubbish to be left outside in the alley for collection and a map to reconnoitre the Venezia maze are the last contact with the letting agent. The apartment at Castello between San Zaccharia and San Marco is alongside the small Campo Bandiera Moro a family zone with a good bread shop which amazingly still had fresh supplies at 5pm.

The first expedition is the quest for nourishment and high on the list is a recommendation in Lets Go Italy whose Rome restaurant reviews proved up to the task. Venice open up its twisted tail as a trip through enumerable porticos and step-up bridges lead to the tucked away Al Vecio Canton Trattoria. A two storied restaurant with tight configuration, abysmal service, ordinary pizza, but fantastic grilled variation of pepperoni/potato/aubergine and greens plus a passable vino Rossi. All was fine until our financial Rottweiler examined the bill to find both coperto and service charge at 12% plus an extra litre of vino on the tab. Do not play with this lady and remonstrations, gnashing of teeth and a recalculation of the bill necessitated a hasty withdrawal under vendor vitriol. The tactics of not listing every bill item, not putting all charges on window menus and indulging in the artful task of wallet massaging is beware the Venetian vendetta. Perhaps the sheer weight of tourists abrogates the need to give service but even a smile tax would be a better result. 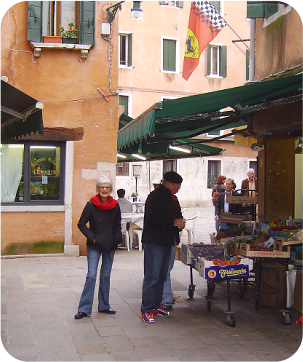 The morning calls for a provedoring trip to the Rialto Markets for the self catering fare behind the ideals of apartment living as no cosseted all-in Hotel cocoon here. A veritable feast of freshly cleaned stargazer , scampi, swordfish at the mongers ,the meat hall for horsemeat, corned fatted polla (chicken), snails, whole duck and rabbit. The vegetables were large and juicy looking while the artichokes were being whittled and the off cut matter was strewn about the market. Throw the crowds of wedgie well built European women tourists resplendent in knock off Prada into the mix it seems a paradox in a kaleidoscope of confusion. Siesta closes down the commercial world and unless ruminating the ruins one must retire to restaurants or walk the alleyways and islands.

Wander to the Arsenale to view the naval area which was once the largest in the known world during the period Venice controlled the Adriatic and parts of the Mediterranean. Meandering down the Vale de Giardini Pubblici viewing glimpses of broken down public buildings, allotments of disrepair onto the Via Giuseppe Garibaldi and back to the San Marco boardwalk for a circuit of San Zaccaria prior to the cuchina rustica bubbling at the apartmenti.

The touts de Senegal lurk the piazzas with knockoff heaven competing for space with the Italian Schools excursion week which only increases the noise as the expressions of disinterest rise above the normal clangour. No visit is secure without the night’s excursion into the piazza San Marco for the duelling orchestras but a somewhat lonely sight greeted as the tide had covered fifty percent of the piazza successfully isolating the groups.

The cognoscenti sat in fumata infused clouds sucking expensive drinks whilst the proletariat stood licking gelato at the perimeters. The final scene plays out at midnight but there is still a late night red liveried gelato provider plying his trade as the tourists retreat.

Enquiry at the Tourist Information Office for boat trips to the glassblowers raised expectations as the quality of information and delivery was a rare Italian first in public relations. The wait at the San Marco jetty for a vaperetto to Murano looking down at green chunky water seemed an invitation to seasickness.

A supersize ocean cruise boat ugly, intrusive and intruded somewhat incongruous amongst the gondolas and vaparettos as it slurped through the main channel and dwarfed all the history surrounding. However the squat vaperetto sailed the sea like going through granita and it seemed we should sing the song a slow boat to Murano or is that some other destination?

The views of Venice and the surrounds made a pleasant boat trip only intersected by the bumps and grinds of manoeuvring into commuter wharves. Murano is a microcosm of Venice with a series of smaller islands joined by bridges but with a lot cleaner lines, wider promenades and Osteria tables at the edges.

The place beckons to be picnicked and a search for the ubiquitous alimentary and good local fare is a part of tourist folklore. Directions abound and eventually the hidden piccolo Italian “Kmart” provides a wonderful array of good produce. Service is via a ticket system a la the western world but with Italian overtones of snail pace at 5 customers per 30 minutes. The inveterate oxygen thief in the fromagerie is on a form of valium that may be part of the plot to force one into the pre-packaged, barcode USA style Deli section. Hey why worry anyway as there is only one cash register open but there again there is only so much time to take a holiday. Settling for a bit of rare carne, rocket ,provolone, crusty bread and a litre or so of Rossi plus travelling with ones own accoutrements makes an easy snack for the seaweed glitterati.

Something about seaside a la carte with the smell of waikame Murano drifting in the breeze, reposed in an idyllic environment makes a cheap and cheerful day. Perhaps there is one problem on a Venetian holiday and that is the propensity to buy extra vino to sit and ponder causing the onset of a sangiovese siesta. A wander past the omnipresent glass shops may seem like sensory overkill but an allure entices to view the spectre of such fine artistry. Lateral thoughts now take over as gifts for home breeds a reverse colonial trade in trinkets and glass. Intricate insects and multicoloured animals are small enough to pack away to take some memory of this pleasant environment from the Venice mass tourism.

An evening stroll along the San Marco board walk is equivalent to the Hajj in Mecca as the passegiata is a Tour group paradise ,a never ending shuffle of Slavic, Asian and German flag holding leaders pushing their minions forward. This is the ugly side of the experience and the only saviour is the dissipation of all crowds by 10.00pm allowing a leisurely walk unencumbered as the waves lap the bobbing gondolas. Any walk confronts the common problem of where to go for a toilet stop as bladder insecurities at E.50 a time is a quantifiable investment in Venice which only has 4 public toilets. Perhaps the pinnacle of clean and accessible toilets at MacDonald’s provides some reason not to desecrate the bowels of history.

Sunday in Venice is Italian day necessitating prior bookings at most major sites as well dressed families take parents and piccolos out to Mass and chow. A Secret Tour of the Doges Palace requires a booking at least the day before and also includes access to the main palace area proving the better value. The tour is all about the incarcerations, censorship and manoeuvring behind the Republic of ancient Venice. The Monty Pythonesque guide “Michelle” Palin added rich pickings with her stentorian counter inflective delivery directly in keeping with the empty semi derelict building.

“You will not carry bag”.

“You will not take photo”.

“You will not fell in stairway“.

all delivered without drawing a single facial change. The pivotal running theme throughout the maniac-logue is the imprisonment and escape of Giacomo Casanova and culminates in the crossing of the bridge of sighs (Ponte Dei Sospiri) the last view for the condemned on the way to the gallows.

Venice is all about jumping on boats to see the buildings, trip through the myriad canals to the islands then alighting to walk the alleyways and bridges. A trip from Arsenale to Academia is a short but expensive commute highlighted by loud talking American students professing to never paying or being caught freeloading.

Dorosduro is across from Academia and has the Betty Guggenheim Palacio Museum as the major drawcard but the sunny streets bereft of tourists are a cheaper option. The streets in contrast to Castello are more amiable to strolling presenting bargain shopping options and pleasant exposed cafes. Galleries, gelaterias, pizzerias, Italio bars and perky shops proved as fulfilling as another intellectual overload and the stroll back over the Ponte Academia past St Stephanos and into the Ponte Rialto is another personal milestone. However reality strikes at the Bierra Trattorie which touted no coperto or service charge and lived up to its name in a subtle ploy to drag the unwary in by subtle means. In Venice you pay if you want authentic eats so take a ticket to play in the second team.

It is a quick four days and the exit is via the trusty vaperetto along the Mestre industrial area to the stazione in the morning. This is a final circumnavigation of the misty islands as we pay back the usury of overpriced tourism by harking the American students advice not to buy tickets. The land based areas of Venezia are the dreary goodbye but the handy Bombay Sapphire smooths out the E Star bumps as new interaction begins on the tracks to Milano.

Download a PDF Version of this article The Europeans fly in flocks from Germany, France…