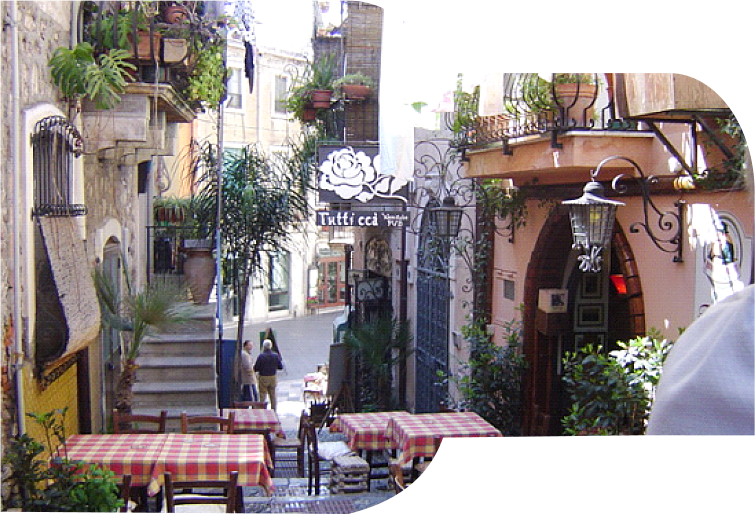 A call to leave Praiano on Costa Amalfi to head for the Sicilian bits is no sinecure as it requires organisation to avoid an early morning double shuffle by bus through the town of Amalfi. The thought of this with the general baggage hassle is a choice of the usurious local taxi or slightly dearer private limo to avoid cerebral breakdown let alone any mechanical ones. The road toward Salerno has the lesser lights of the peninsular Maori and Ceruta cementing an opinion that the Praiano sector holds the greater attraction. The Stazione Termini at Salerno is as ordinary place as could be expected in an industrial zone servicing a tourist area.

Typically the Station is an art form in information dispersal so that the mysteries of platforms, train movements and destinations remain a secret of the State and Station masters. Perhaps this provides the boon to meeting fellow travellers as one uncovers the Omerta of Trenitalia in mutual information sessions. A 30 minute departure delay allows a break to the supermercato to stock up on el cheapo Red wine, crusty breads, thick slices of provolone cheese and bresola for the 6 hour ride.

The Palermo train is a testimony to rail travel as it chatters comfortably down the coast boasting coastal vistas to Italio factory scenes, farmland, beaches and woody hillsides without reaching spectacular proportions. The vehicular road towers high above, crossing valleys on strung-out viaducts and no doubt would provide mind numbing motoring views. The train with much shunting boards the ferry at Messina and breaks into two parts as one goes to Palermo and the other to Syracuse behoving the maligned organizmo prowess of the train crew.

Messina and the crossing is uninspiring and the first coastal sectors seem to be the bad taste nondescript villages with luck to be Oceanside that do not change shape ,size or density until Giardino-Naxos is reached.

Giardino-Naxos is the terminal for Taormina Town perched above and an E20 taxi fare is notable for its brevity and price but is made up for with proximity in delivery to the apartment on the car free Corso Umberto. This main street is one of the legendary passigiata paradisos and the taxi went straight into the throng scattering all adherents to deliver its baggage oppressed fares. The first views of the passigiata expressed the opinion that pound per square inch the quality was stratospheric with the doyens of Italian design represented by every pouch hanging participant. 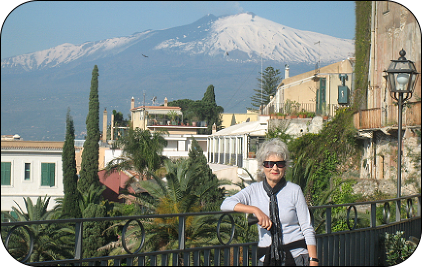 Antonio owner of Apartment Centro One on Umberto was waiting to show the 2 bedroom E100 per day apartment and rapidly filled in the idiosyncrasies of tenure as it had belonged to his grandmother who had passed away 2 weeks ago. Centro One is compact, harbouring a one man kitchen with minimal rotational space, a collection of space impinging cupboards, vestibules, tables, and ornaments eating up precious living space. A kaleidoscope of mosaic tiles fused together in different hues on the floor and pride of place amidst the collectorama was a 1999 calendar that seemed aptly in keeping.

The lounge balcony a-la-laundry hanging area obscured the view of Casa Nico Trattoria five meters across the alley causing much speculation of customer provenance. A daily observance of dining habits of the cliental showed plenty of swarthy Mafioso and much fallow time as the place did not fill until 9.00pm.

The weekends are a moving morass of people as the Corso Umberto is party to the tourist scramble and Taormina gets back to relativity as numbers halve on Monday. The town is famous for over the top Italian wedding productions with the clans dressed to the nines and nothing to have 10 in a day with paparazzi style photographic frenzies in Piazze 1X Aprile.

The Sant Agostino Cathedral seems ‘munsterized’ as a massive customised American Yank tank is masqueraded as a bridal car and the café Umberto cafes face their chairs in line to the munificence of the “Event”. The bridal parties intermingle with the tourists and prance about as all jostle to get the picture postcard shots on the over slung piazza. Somehow with all this going on we can wedge into Taormina’s nascent pervading charm helped by Mt Etna smoking silently away in the background. 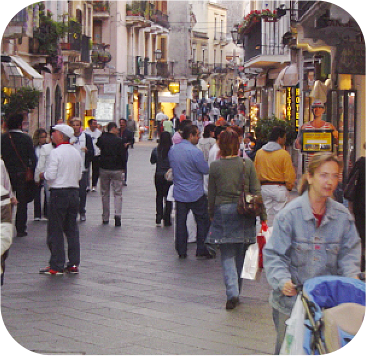 This Kodak moment is only surpassed by the Teatro Grecco or Greek Theatre not much further around the town which lines up the dual craters of Etna and the puffs of smoke appear through the colonnades as a halo. The current site is the remains of an original 300BC Greek base rebuilt as a Roman Theatre seating 5400 that even today is used for drama and rock shows. The views are unsurpassed and the North south sweep of the coastline shows the Naxos Harbour and Northern coastline and behind Castelmola lurks above like the sentinel village it is. Taormina is use to the terror-tourists as they come in shiploads led by blitzkreigging flag-waving tour Leaders spilling and filling the alleys. The omnipresent cruising herds make it necessary to pay the E6 entry fee on the dot at 9am so that an hours grace and serenity can be had prior to the overkill. The sense of grandeur is unsurpassed and to dream of gladiators, wild beasts, the original Greek Dramas it must have been the wonder of the age.

Taormina is a playground for the well heeled and the hotels spill down the hillside competing for sun and views over Giardini-Naxos and Etna. Retail prices reflect the passive tourist who never ventures off Corso Umberto to shop down the steep side streets which feed the locals at prices equivalent to the rest of Sicily. Such bargains at the stand up espresso bar included a doppio coffee and crusty panino sans mortadello for E2.50 and repartee with the local barber soon leads to an appointment. The exercise involved individual hair snipping for 30 minutes on a balding pate and interaction which involved 2 customers and the 2 barbers on the merits of Australian immigration inadequacies.

The inside knowledge of ‘Iraqi “refugee rip-offs when good Sicilian immigrants were tossed out was the bone of contention. The lads sent us to the local Roccepia in Via Cappucino for cheap Messina beer (E2), beef olives & seasonal greens (E4) as the Sicilians poured through picking up arancini and lasagnes for home consumption. 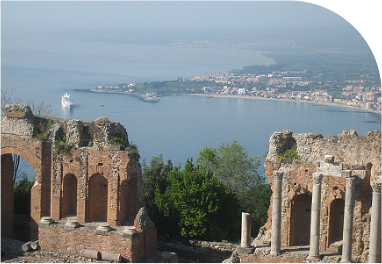 A trip to Castelmola was not without Sicilian intervention as the timetable showed a 2.15 departure time so one could assume this will be a good estimate for departure.

Dually arrived at 2.05 to find the bus gone and along with other grieving passengers enquired at the bus Terminal why for bus bugger off?

Being naturally suspicious a question was asked why so many “Blowflies” or Cabs were hanging about the bus station but the Bus capo thought it a miracle that 4 cabs happened to be unemployed at the same time. It is not an Einstein situation that we along with many others now had to take a taxi at inflated rates, whilst discussions of the Italian book of War heroes, reverse gears in Italian Tanks were muttered out loud.

The road to Castelmola is a series of hairpin bends that stop at a perched ,precipice hugging almost Tuscan like town and some sort of justice prevailed as the bus was stopped well short of the steep piazza. The town can be pardoned for its tourist orientated excesses as the views and vantage points from the many cafes are worthy of any wonderscape in Italy. The bar Turrisi has a claim to unabashed tourist chic with its total 4 story phallic “phitout” including penis taps and every imaginable orientation to la cockaracha. The walk down from this eyrie is a recommended 45 minutes of car dodgem, mind blasting views and a peer into the apartments and backyards of the natives.

We are slowly slipping into the Sichiliano malaise and may not have the impetus to leave without coaxing, let alone to take a day trip around Etna. It is a full day excursion with an early departure via bus to Giardino stazione for a train to Catania, underground train to Borga and a short walk to the Etenea Station and a ride on a shabby little loco with a staccato beat and drunken lurching.

This is a private train on the Circumaetna route which looks like Leone used it in a spaghetti western and is a Spartan, red and gray acting as a school commute in the downtimes. From the Catania end the track starts out in desolate landscape through Adrano and Bronte coursing its way by dark lava fields of black toffee, massive cactus and satanic scenery on snow-capped slopes.

It is interesting history for the literary heathen that Bronte was the Ducal seat of Lord Nelson granted to him by King Ferdinand in 1799 for winning the Neapolitan wars. 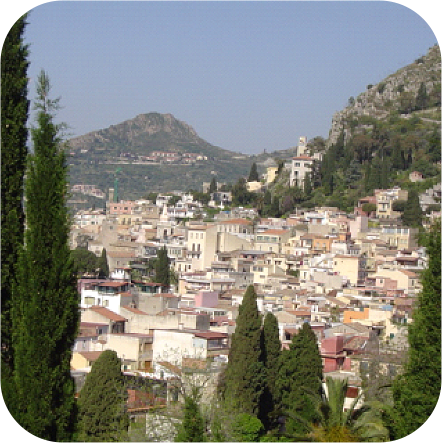 In England the Rev Prunty was so enamoured and obsessed by Lord Nelson that he changed his name to Bronte and subsequently you spent most of your youth reading Emily and Charlotte Bronte in absolute disbelief that they were nom de plumes.

I knew you would be… but that’s not all as Bronte produces 85% of Italy’s pistachio as well.

Advice from guidebooks, ticketsellers, and conductors etal is that Randazzo is the best place to stop to break the journey specifically from a victualling angle, not visual. The dark black lava constructed town was rebuilt after 1944 war destruction and one could only ponder why. The only notable building The Duomo showed satanic foreboding, stoical paintings and its austerity ingratiating its aura into the landscape.

A by line in a food column on Randazzo passed on the tip the best lunch stop in Piazza san Giorgio is the Trattoria San Giorgio Il Drago and it proved to be the ultimate taste sensation. Local Rabbit pomadora, onion, capers, Pork sausage, walnut panzotti, ragu ravioli, seasonal greens, tiramisu plus carafes of Etna locale Rossi… four people at E49 proved massive value and service into the siesta.

Escape from the calorific excesses onto the next Thomas the Randazzo Tank Engine leads into the picturesque part of the trip via Linguaglossa to Riposto away from Mexicana like scenery into alpine countryside and gentle snow covered ski slopes. Giarre Riposto Station is a jump off point to allow a bus connection in the wall of death seats at the front of the bus as it courses through the Giardino burbs and traffic mayhem to Taormina.

The taste of Taormina is driven by the tourist dollar but in past incantations it was a home to the expatriate artist and intellectual offering up the polite synonym of ‘Sodom’ but now is tucked into the bastion of the well to do. So when I consider we are staying two streets away from D H Lawrence’s house where he wrote Lady Chatterley’s Lover maybe the last couple of chapters may strike home? 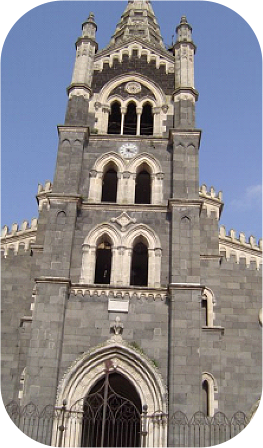