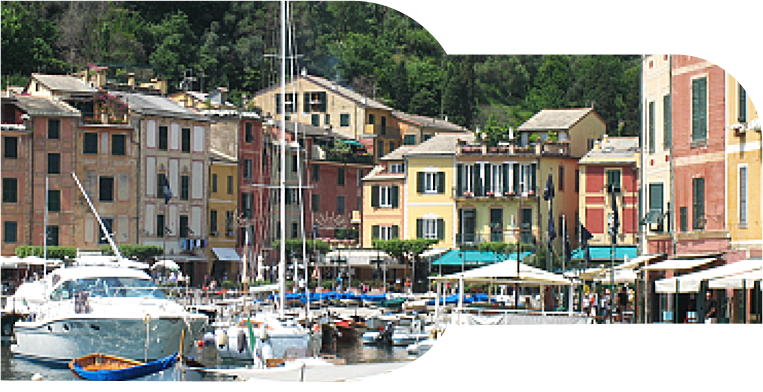 Day-trippers delight is to stay where you want and have sorties into the chosen lands and return to base reasonably able to holiday with little collateral wallet damage. A trip from our home at Monterosso in the Cinque Terre is easily embarked upon with only a modicum of organisation as the day is in the hands of Trenitalia. It seemed we were on a fully ‘retarded’ day; all late trains in Italy come up as retarded on the communications board, as trains were determined not to connect, but everything is palatable on a fine sunny day.

Monterosso Stazione serves a great espresso to kick start day-trippers onto the Santa Margherita Ligure train onward up the Ligurian Coast to the first stop of the day. Santa Margherita is a glitzy little beachside star that prompts the search for the first of many grazing halts as the bustle of morning greets the walk from the train.

The triptych of Camogli, Santa Margherita and Portofino makes a luscious portrait of the Italian Riviera as the forgotten holiday venue is now bursting back into current vogue. This was the glamour capital of the film industry and all followers of Loren, Fellini or Ponti have a mental picture of Portofino inscribed on their brain even if only three stalls back.

Movie memories of dastardly crims running down through narrow streets out onto a waterfront of archetypical Italian cafes surrounded by colourful white, wooden craft bobbing on a perfect sea are still entrenched in a celluloid memory.

Santa Margherita mid morning tarts and warm pastries of carciofi and gattafin are Ligurian tasty delicacies which compliment the doppio lungocoffees as the ease of seeping into glitz tourism commences. The shops have a Rodeo Drive aura and the Mucci, Pucci and Gucci compete with Diors, Dolce & Gabbanas inveigling the Italian elite passing here on their way to Portofino. This is only a cursory visitation with limited icon infusion at the duomo and a wander through an opening commercial area prior to broaching routes further afield. 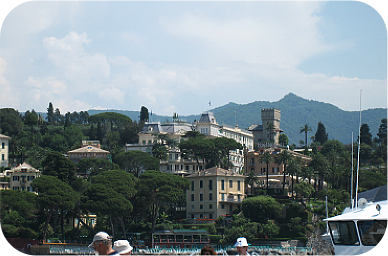 Far better to join the touristy mob and go by boat past the steep Cypress and pine covered steep promontories taking in the luxurious mansions bedecking the rocky landscape. The second way to get to Portofino by road carries the risk of entry refusal as the difficulty of access is exacerbated by the vetting of traffic by carabinieri. In times past the conquering Romans also gave the place a miss as no doubt the line up of chariots at Portofino entrance rebuffed their intentions on the way to nowhere. The entry by sea into the boating haven of the former small fishing village is archetypical of every movie shot of the tiny port as the pink, red and yellow buildings fringe the dock. The ferry steers through the mass of boats past the behemoth floating palaces of the mega rich suppurating on varnished decks whilst sucking in the sibilant sounds of awe struck gelato lickers. The sheer audacity of even parking these leviathans in this small cove adds the quantity of them and us to the romantic equation of battle zone Riviera. 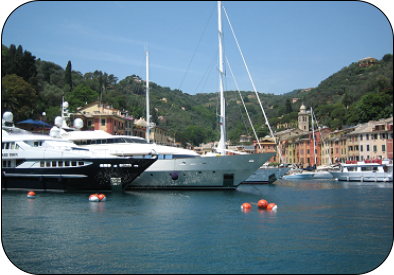 In the 1860s the British consul Yeats Brown transformed the fortress on the promontory into a villa which today in the village’s hands still goes under the Castello Brown nomenclature. The walk around the cove up to the Castello is along scented well planted walkways and reveals a spectacular view of the whole Portofino Bay down the coast toward the Cinque Terre. The alternative walk in this very compact cove is to the chapel of San Giorgio an 11thC plaster and marble edifice which provides the complete viewing platform for the area. The pathway lent itself to a relaxing cold Arruzo and Parma ham Panini as perched above the cocktail decks the wares of the tycoons were exposed to the prurient perusal of the Portofino unwashed.

Well it’s all true and real to life but the style of clientele is now the Nuevo Euro with a capacity to pay but in return diluting the quality quotient with no added value for the day trippers to pry on.

The restaurants are twittering as the lunch trade ramps up, tables facing out to the bay, purveying all who pass by into the small commerce areas at the back of town. The painted facades of very simple buildings around a piazza blend this compact victualling haunt into filmset quality and the seen can be seen. The rumour mill tells tales of the religiously adhered to local provision for no noise after 10pm, not even loud clothing. Evacuation through town is via the bus station at the rear of the buildings and provides the alternative exit of about 15 kms to Santa Margherita. The road passes homes of, now three times new Italian Prime Minister Silvio Berlusconi, a well heeled owner who fits in amongst the Pirelli, Couturier and Football team magnates in precipitously perched layered villas provocatively spilling in tiers down to the water.

The road back into Santa Margherita is an anti climax as the sprawl of the waterfront seems quite cosmopolitan after the tight configuration and more Italianate Portofino. The day is not over as the next train stop on the way back is to Comogli the village of high buildings set on weather worn rocks down steep stairs from the stazione. This town has born the brunt of mighty sea surges and a history of fishermen leaving the port to chase the catch. The medieval centre is still intact with very tall and slender houses, alleys and porticos arranged around the little port. The houses are said to have been built to compensate the loneliness of the wives as they waited looking out to sea for the return of the fishermen. A massive tower which survived from the Dragone Castle built into the cliff houses 20 giant tanks of the Acquario de Tirreno fed with sea water.

Comogli is a good departure point to see the Abbey complex of Santa Fruttuoso the 10th century church of 3 knaves and cloisters on two levels. This trip is better organised on its own and intrudes too much on a three stop day trip as il traino beckons to be caught and the ride stops in Vernazza in time for an evening meal. The search ends at the very last building at the rear of Vernazza at Il Pirata the quirky busy Sicilian Café www.ilpiratadelle5terre.com with the irrepressible owner twins hustling trade with a nonchalant but omnipotent air.

The boys tout all products made on premises with a superb aubergine parmigana, great Sicilian bread, good casa rosso and the piece du resistance the genuine made to order ricotta connoli. A fitting finale to a train day out as the final stagger to the stazione soon brings a passing train only 2 minutes home to Monterosso New town fringed by the lights beaming onto the bay. 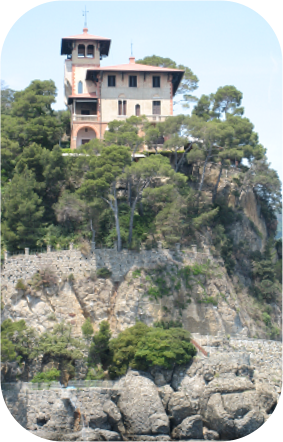 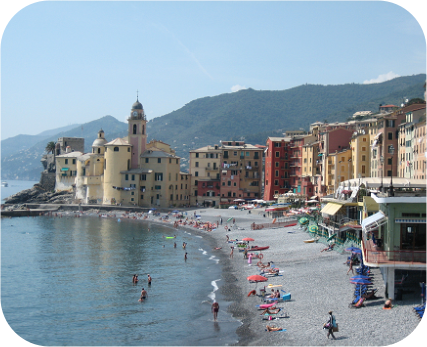 Levitating on a day trip to Levanto – redux