Yes there are other parts to the Ligurian Coast than the Cinque towns and a call to visit friends in Levanto is a prime opportunity to do it the Terre way by going up and over the mountain. A phone call to check all was ready for the journey made us aware of the time frames from Monterosso; 3 hours by foot, 30 minutes by road and 4 minutes by train and it was a very hot May day as well.

Meandering down through the tunnel along the front into new town Monterosso was time to top up the morning snack of tomato, crusty breads, and cheeses and check the water bottles. The very sporting looking old gent riding incongruously up and down in tour de France gear was Ciak the legendary restaurateur and seeming owner of every thing Monterossan nonchalantly waving to his minions.

Instructions are to head along the beachfront, hit the two towers near pathway 10/1 and head for the track, past the now shabby reclining Neptune statue built in the 1920s wedged into the rocks undoubtedly the main décor of the hotel behind. The pathway is a nice horror show first up as it heads directly up hill for 50 minutes an intimidating stamina test on a hot day interspersed with crumbling pathways ,moaning missus & stone stairs adding to the gymnastics.

Relief comes at the crossing to Punta Mesco as the route now winds around the hillside through trees and light scrub with ocean breezes and blue water views. Thank god the first building reached on the crossway to the Levanto road is the small Albergo or Inn and the blizzardly cold bierra and wine is a divine blessing prior to continuing down another track. The views from the path are all across the bay as staggering past the 13thC castello ,once a prison but now some lucky suckers huge private residence prior to dropping down into Levanto true and the search for Ernesto.

The apartment is on Via Garibaldi ,the seventh town on this tour with a major street named after the man of the red shirts fame, is also the shopping horseshoe of Levanto. The bell to the apartmenti is rung and the terrazzo is soon the place for prosecco trevigiana and much talk of a day reconnoitring the surrounds. The large terrazzo two stories up overlooks the length of Via Garibaldi and is rimmed by buildings with painted facades of false columns and frescos. The story goes eons ago that a wealth tax would be foisted on the Levantines based on their fancy marble pillars and columns so the smarties just painted the fancy bits on as a façade of structured patterns and thwarted the tax.

Levanto has a catchphrase “the slow city of good living” and is marketing itself in competition with the Riviera / Cinque areas as a pace sedate enough to take some time out in solicitous pursuit of fine fooding. The pert business precinct in a pedestrianised centre is drifting with languid allure and cafes have a nonchalance removed from our days beginning. The railway which was on the front has been moved a kilometre inland and the fascisti Casino on the waterfront is being renovated and the pool modernised. This is a place that the Italians come to holiday and the typical Ligurian grey beach is a drawcard surrounded by a marina that hosts the wooden boats for the pleasure seekers. 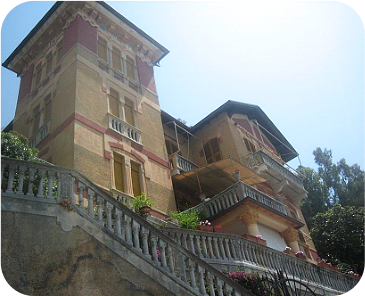 At the far southern end is the Villa Agnelli that was a cornerstone of a 1920s period of opulence and still commands a nook in the best corner of town. This fabled holiday home of the scion of FIAT no doubt was used for the trappings of Gianni the “King of Italy” as he manipulated government and economy to suit himself. The gardens and house are part of the beach façade that curls around to the exposed north and make up the poster presentation of “Paradiso Dei Surfisti “ that today looked benign but must cop the Mediterranean storm season with a vengeance.

Now the slow bit comes with this territory and even the lunches are long events as this is the home of mangialunga or the long lunch in May and Degustibus in September. Mangialunga is a 7 kilometre walk for lunch with up to 1500 participants walking between 5 villages with bands titbits, taste tests and vino at all stops. It has become so popular that the numbers have to be limited and requires starting times from 9am through to noon to spread the revelry over the four hour event.

Degustibus is a stroll along the Borgo Marinaro, the ancient centre of the 10th C town, creating a tasting sensation that has participation of all the food and winery traders who supply local Ligurian products in line with the slow food edict. The area trades on these two festivale but with a population of 5000 and only a few hundred available rooms the charm is not swamped by tourism. The large Piazza della Loggia with the 13th century Loggia as its mainstay has a weekly market plus the shops and restaurants are of international standard. 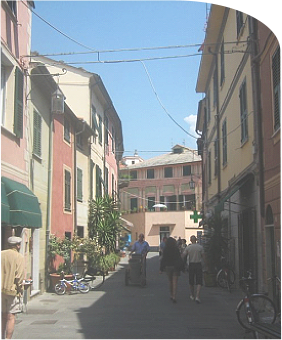 We wander the town sucking in the smells and sample the good wines before buying the siesta lunch of true delicacies chosen by Ernesto whose explanations enriched the various purchases. The gattafin is a chickpea flour pie more like a burek with spinachi and pecorino, the artichoke with margold, wild herbs and pastry in a flan like triangle, the Tuscan style mantavano salami incorporates garlic and wine.

All was accompanied by a focaccia, almost resembling deep fried bread, but this green illusion is the result of a drenching of first press olive oil.

The opening gambit is yet another walk prior to a resurgent calorie attack allows interaction with the siesta dwellers and the inevitable trawl through the haunts of fashion as shops opened for evening trade.

The Levanto evening sport of passigiata is perhaps more aptly named cruising the carruggi as the Italian terminology for the alley maze made some sense to the aimless promenading. The table was set and the glasses filled as the primi of stuffed vegetables, a dish of aubergine, peppers and courgettes filled with egg, bread, marjoram, thyme, came hot from the forno.

A nasello or nose fish was filled with garlic onion and lemon wrapped and grilled and served with a baked herbed tomato with a blizzardly cold pinot griggio to wash it all down. This day of largess had to end some time and there is now no possibility, or inclinations, to walk back to Monterosso so the train which heads down the Cinque every 40 minutes is a no brainer.

Ernesto had saved a Turino crusty red and a nightcap of Siciliano botrytis to finally sort out the drinkers before the replete customers head for il traino and Cinque terrestrial travel. 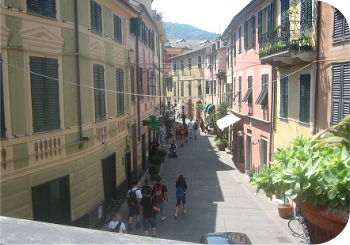 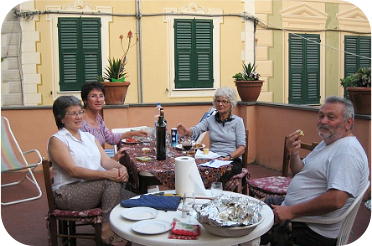 The Count of Montenegro

A Personal Tour of Barga