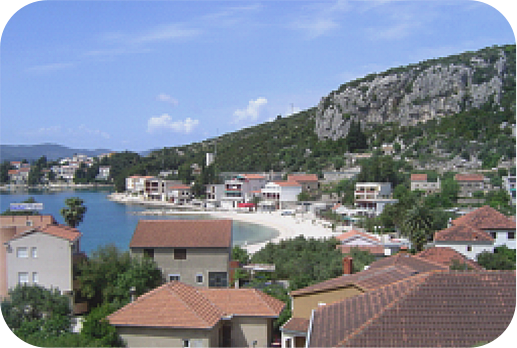 The Europeans fly in flocks from Germany, France and England direct to Split or Dubrovnik and spare the traveller their intrusion on the meandering Dalmatian Coast road.

The Split to Dubrovnik road trip should be rated a United Nations World Heritage listing as the Adriatic unfolds and lifts its dress to show a girdled coastline.

Croatia does not do trains south of Split but buses more than make up the slack on a lofty visual perch and the domestic bus trip only takes 45 minutes longer than the express.

The bus station at Split is an efficient operation getting the crowds on without fuss but the inevitable grab is the baggage which costs extra to be stowed.

The prerequisite knowledge for this trip is to make sure that if the front seats are not available then a booking on the right hand side be requested.

Passengers come and go at early intervals on the commute via Split suburbs with every disembarkation causing manic jockeying amongst tourists for the right hand seats.

The Split burbs rival any dog-eared modern Italian town for ordinariness but the blue of the Adriatic soon comes into play and forms visual sensa-surround.

The road is a pathway etched into the base of rocky mountains as it follows the coastline with perched forts on the horizon and rims of village houses that seem to act as rock barriers. Beautiful coastal villages and beaches flash through the Kodak psyche and eventually a mutual common ground of mindless beauty settles as a benchmark. The Makarska Riviera is the domestic playground and drifts into the Gradac triangle as the first more upmarket multinational beach resorts follow.

White beaches fringed with trees and buildings right at the waters edge hug the roadside seemingly in deviance of any tidal surging. The area follows the longest beach in the Dalmatian Adriatic at 6 kms but it continues in small enclaves giving the visual concept of separate holiday entities. The bus has 3 refreshment halts of 10 minutes and the first has bars and markets available and the loading of wine, strawberries and fresh almonds provide a boost to travelling spirits. 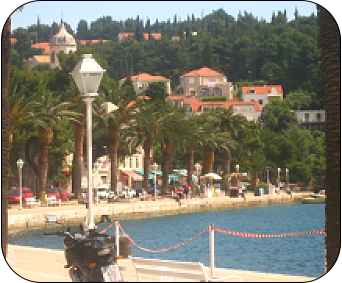 The major interest is entering Bosnia at Neum where a 5 kilometre sector of territory bisects Croatia. It is a cursory stop at the border that barely drags the ubiquitous cigarette out of the guard’s mouth to do a visual check and casually flick passes the bus onwards. In comparison to the journey so far the area looks like a badly developed East German holiday resort of the sixties with little intrinsic beauty in the concrete bunker like units.

The bus has a dual purpose stopping in Neum as any Croatian passengers leap into the wayside stop wrestling packets of fags and bottles of liquor from the duty-free shelves as other hungry passengers swarm the char grills. The bus driver in the space of 10 minutes hoovered a large bowl of soup and then attacked the char grilled remnants of Titos Zoo on a plate that seemed designed for 4.

No wonder the ticket collector now emerged as the new pilot of the Croatian bus for the down hill sector to Dubothernik.

The journey continues in a never-ending vista of water and holiday areas all in a sombre loneliness in the May off-season. A notable difference is the delta like paddy fields of Opuzen simular to any Vietnamese cropping system with high grasses and channels of muddy water 60 kilometres short of Dubrovnik the Peljesac Peninsular starts at the bays leading to Ston and Mali Ston. Here are the world famous oysters and mussels in great rafts out into the placid waters surrounded on the hillside by a necklace of turrets and fort walls.

The battlement walls stretch like a grey worm over the hills and go for 5 kms encompassing 41 towers and 2 forts dating from 1000AD but largely expanded in the 13th and 14th Centuries. Perhaps even then they were protecting the seafood and the best Peljesac vinos?

The bus soon passes under arches of the giant coat hanger bridge leading into Dubrovnik perched over the super large multistorey cruise boats docked at the Ferry terminal. The glossy mammoths of the Cruising world tower high above all surrounding buildings and look fat and sleek like termite queens waiting to be fed by the massing buses returning passengers.

Disembarkation begins the worst aspect of the Dubruvverhood as a scrum of motley Sobe (room) merchants attacks the arriving passengers exhorting their accommodation wares. The apartment inside Dubrovnik is not ready until the following day so one night lay-up is necessary and any good clean stopover will suffice. The bags are not even out of the bus as the melee presents a poor introduction for in the ensuing scramble operators are offended by any brush-off and abuse in Croatian begins. To escape further collateral damage the only avenue is to grab a cab to the Pile Gate and a closer position to look for localised rooms. The bush telegraph passes the description on and a further lesson in cerebral thuggery emanates from touts armed to harass. To escape the inevitable panel beating retirement is to a nearby bar to rest and recuperate before contemplating a more leisurely search for rooms. 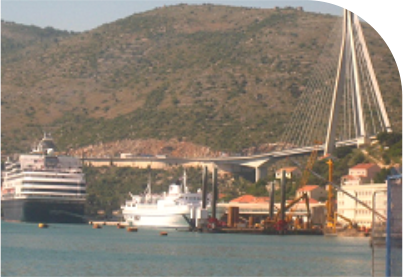 The tourist Information Centre at the Pile Gate is a well-oiled machine and a vision of what to and where to inspect is soon forth coming.

Advice is to knock on the doors of houses showing “Sobe” signs and negotiate a rate. A mission successfully leads to a comfortable series of rooms only 100 meters from the gates itself where Kate B & B at E20 per person, amazingly owned by Kate, is reminiscent of University boarding days.

The entry next day through the Pile (Peelay) Gate is the nearest passage to the pre booked ‘Apartment Antoine’ with luggage scull dragged down the grey steps past the square of Dubrovnik’s original water well.

To reach the apartment is a marathon 120 steps upwards just inside the seaward wall perched over the red roofs in a block of 3 local dwellings. The apartment is a 3 bedroom flat with kitchen and bathroom on the ground floor and 2 floors of bedding. Entry into a courtyard alerts one to the domestic noise of the neighbour’s extended Croatian family of 3 generations blessed with obligatory orange tree and washing strung all about the scuppers.

Staying in the Old Town is an insular experience as the sounds of everyday Dubrovnichi suppurates through the close environment interacting with Tribes of cross pollinated cats. These patchy moggies lurk and breed everywhere and a subtle pervading effluvium of cats piss does seem to permeate the close alleys.

In deference to the sensory atmosphere a town pride shows in potplants, flowers, and vines as any patch of dirt is cultivated and titivated to enhance the ancient buildings. The Old town seems to tumble downwards toward the centre and rise again toward the hills where modern houses overhang the whole of Dubrovnik.

Walking the Dubrovnik wall is the premier activity and it is open between 8am and 7pm with the wisest times to avoid heat stress being early or late. It is a megalithic edifice started in the 10thC by the era’s greatest architects standing 25 mts tall, 6 mts wide, 1.5 kms and 1 hour to circumnavigate. The wall survived the 1991/2 Balkan conflict but over 2000 bombs and guided missiles destroyed half the town. The restoration throughout has left few visible features and the walk gives a good internal and external sight of the complete Dubrovnik. Towers spring up every so often and vendors dispense the odd coldie or two in the niches as the legs give warning of a hardy task. 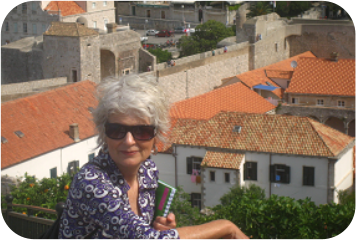 Passing by the 14thC Sponza Palace where the commerce and towns business was quantified there is a Latin quote engraved as to the propriety of the sole arbiter.

“Falsifying and cheating with the weights is forbidden.

While I am weighing the goods. God is measuring me “

The arterial centre of the town is Stradun Street or boulevard which is a true boutique street of the world without the prices reflecting exclusivity redolent of other European iconic streets. It is easy to have a coffee and purvey the well-heeled and backpacker alike all enjoying this devoutly Croatian ambience. All alleyways off this street have mini cafes, bars and shops ratcheted into every nook and cranny but the more exclusive dining is in the larger squares. Originally Stradun was constructed in the 12thC to fill a gap in the old Ragusa Island and is paved limestone polished by myriad feet to a twinkling sheen that reflects in the night. A titter and chatter reverberates as the tourists go back and forth along its length seemingly only interrupted by the bells at the clock tower on every quarter of the hour.

This is not a 24 hour town like the techno-tourist haunts and at midnight one can own this street standing reflected in the streetlights and ponder its beauty silently.

The spectre of the war is never far from the psyche and a concert for the memory of the children killed and displaced was held in the Rectors Palace by the Dubrovnik Symphony Orchestra. The price was affordable at E50 flat floor and E70 in the balcony but a modicum of exclusiveness existed as only 150 attendees were able to fit into the setting. A plutocratic crowd of ancient aficionados, highbrow followers, comb over snoots and uglies in shorts combined in a mixed salad of humanity. The scene in the courtyard was like a private Roman Villa with the performance area open to the sky and surrounded by 3 story balconies. This sense of surreal was one of 2 performances and the Franciscan Monastery also had a program of choral and string nights to fill a sensory week. This was a melting pot of the committed getting great value in what is listed as the supreme and aesthetic centre for micro performance music.

The Rectors Palace dates 1435 to 1465 and houses all government records and 15,000 works of artistic and commercial activity from the preceding centuries.

Dubrovnik is not necessarily a cultural overload as a plethora of alternate activities lurk amid the nights making with a constant stream of bar hoppers cruising both the inners and outside of the walls. Nightclubs and techno joints abound with their posters pasted up like bad graffiti and one hopes somehow they are cleaned up afterwards. A gypsy band Ekrem and the Gypsy Groovz were on at the Club Karentena but just meandering down Stradun finds them putting on an unsolicited street performance. This tight Mariachi style brass band with a lone drummer filled out the edges pumped a fat sound ricocheting off the stone and activating even the most passive pacemaker.

An exercise in International Tourism is to visit the Dubrovnik Casino at the Excelsior Hotel 1500 meters outside the Ploce Gate which is pythonesque to a ludicrous degree. “You will make photo “is the greeting to show photo ID and then stand aside and have another photo taken by the security. Entry is into a large room accompanied by two sallow security personnel to look at 4 bored croupiers in drab surroundings with a E50 minimum uptake.

This limit was obviously beyond the 20 punters in attendance as not a soul was at the blackjack tables. This seemed a futile bad taste party as the sheer disdain that the guests are treated is the archetypal bad customer exercise. At midnight the doors were locked and the lights dimmed as unsubtle evacuation motions ended the ultimate Balkan Tourism fiasco. 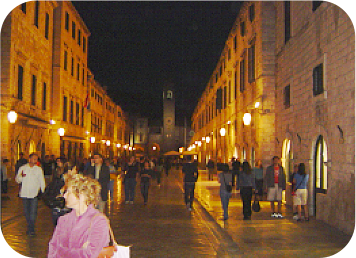 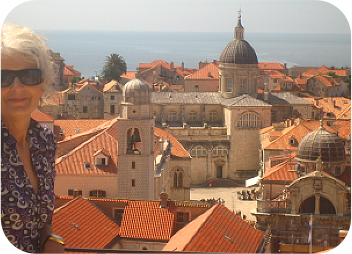