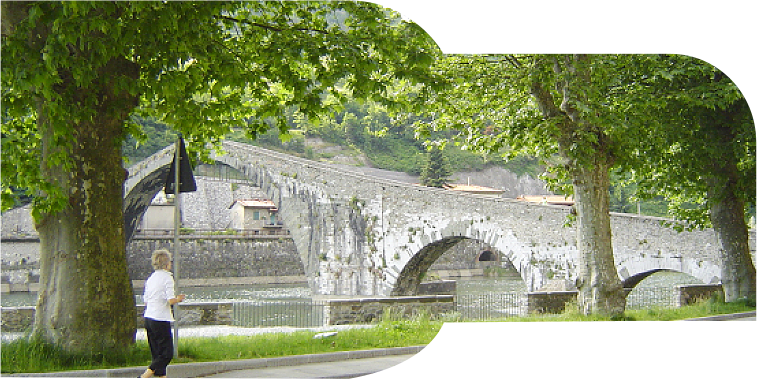 Barga is a relatively isolated place hiding up the Northern Tuscan valleys successfully avoiding the “Terrortourist” and to expose its virtues is tantamount to a violation. Founded by the Lombardi the town has acted as a buffer between the Luccan and Florentine cliques and as a result had developed a conciliatory trading history. This Swiss like neutrality reduced any collateral damage during times of fighting and has allowed Barga to survive intact and ready for this Italian journey. The Garfagnana signpost off the Florence Pisa highway steers the traveller around the grey rampart walls and dry moat of Lucca into the Serchio Valley road. A winding route follows the Serchio River both sides through the ancient glacial valley until meeting at the Ponte Della Magdalena. 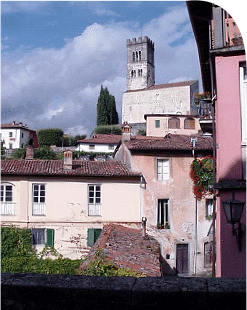 The Diavalo Bridge or Devils Bridge is an impossible suspended arch acting as the sentinel to the Barga road a stone frame of an ancient picture. The legend from the 11th Century is a fabled saga of the Devil asking the builder to give him the first soul that crosses the bridge in recompense for allowing the Ponte to be built. A bridge was erected and the builders pig was pressed into crossing thereby thrusting the devil into apoplexy.

The Barga road snakes through villages that encroach eerily into the motoring psyche and the driver’s equilibrium is a test to raceway skills. An hour of semi torturous twisting pops the vehicle into a fairytale opening at the Walls of Barga a typical Tuscan walled hilltop town at 850meters. The opening to the village is via a small car park at its entrance, but with a difference, a free 24 hour park.

Let the Christians loose now that the lions have gone could be a catch phrase as the Village is a tight Torte of cascading homes in steep pitched streets a veritable maze to weary travellers. The Agents timely offer to help in locating the apartment “La Lucchess” to dump the spoils of 3 weeks travel was worth her fee. A rustic Apartment wedged into a 90-degree slope is set against a background of other apartments and a view of the 11th Century Duomo (Cathedral San Christoph) hovering above. A pert kitchen lounge and courtyard down below and 2 bedrooms upstairs for A$1100.00 per week is great value.

Primary thoughts of food led onto Via Marconi where Trattoria Da Riccardo played to an early clientele perched atop stunning views over the valley. The place is full of visiting Americans, French and Italians with local Bargese flooding in around 10 pm. The legendary Tuscan soup is the quest and the Zuppa Riboletta is the primo choice but a passing waiter with steaming platter of shanks causes a change in menu selection. The aptly named Stinco Forno (Roast Pig Shank) proved to be a great secondi added in rare fashion by the addition of local vegetables.

For four people, 2 courses and 2 carafes of house Rossi an E50 tab is in the best value stakes let alone the protein overload Barga is alive musically with Opera rehearsals, Music Schools plus suppurating sounds coming out of the Barga Jazz Club providing a background interaction with Village hustle. 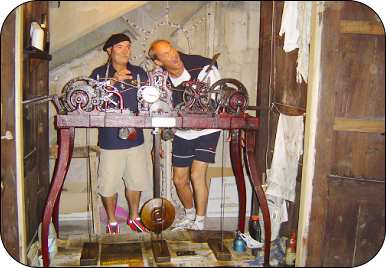 A wander through the streets of Barga reveals an uncomplicated, very tidy fortress town with an active music conservatorium and the smallest opera house in Europe. A nondescript building houses the “Teatro Dei Differenti” which in its first incarnation was The Theatre “indiferenti”. An American officionato had the place restored to its original glory, unfortunately the Italian government guideline presented an ugly façade not in keeping with surrounds, and the 280 seat Opera House now performs a limited season from May to August. The season in July had the first production of a previously unknown Vivaldi Opera from 1773 called Motezuma that was performed in Spanish with a German and Belgium Troupe. The rehearsals were accessible to the itinerant and on sunny mornings the cast warmed up in the Piazza outside with the high notes drifting along cobblestone streets.

This is a village of consistencies and a reminder of all things logical apart from the bells from the Duomo erupting at 15 Min intervals. The clanging would not be so intrusive if it were not for the irregularity of the peals in the early hours of morning. It seems that a Quasimodo with an irregular heartbeat is let loose to beat an ancient rhythm he only is privy to. This mystery was resolved in some part by accosting the locals of Ariosto’s Bar and bemoaning the facts about early morning bell counts. This question is an often asked judging by the web at http://www.Barganews.com whose archived notes show the answer. It seems the bells are on the maritime 6 hourly cycles interspersed with a manual frenzy at 10am and 10 pm.

The town like any good Catholic Community has the Church on the highest point and the Duomo San Christoph is a symbol of ancient teachings. 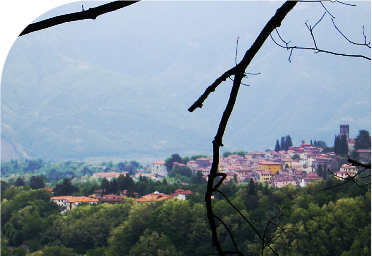 The surreal statue of Christoph is a 5 metre wooden Pastiche that bears a likeness not seen in iconic statues throughout Italy. The Mayan type statue would have the Von Dannakin adherents salivating and it alone is worthy of the many steps through the village. Views over the stone walls are encompassing and the mansions in the valley outside the wall behove the expatriate luxuriating in the passions of history. The hills are covered in chestnut groves interspersed with flowering trees scattering their spring mosaic on the ground underneath.

The Tourist Bureau opens and for an Italian Institution was verging on being helpful as internet access was free along with the large festivale posters of the town. Maps and information are needed, particularly for the uninitiated, to set about the Garfagnana Valley and the Tourist centre provides them all.

A secondary passive tourism exists in trekking through the Appuan Mountains and surrounding hills with well-marked ancient mule trails providing easy delineation. A good walk starts outside the walls into the “Newtown” opulence with large plots that stretch along the valley road covered by avenues of spectacular trees. The Villas in often overgrown grounds possibly provide Italian city summer escapes into a cooler clime and are soon left behind as the trails head into the hills.

A trek to the misty perched town of Sommocolonia reveals a mystery plaque in the broken camponelle (belltower) in memory to the attack on the New York Twin Towers on September 11. The trek is via the chestnut wooded hills on a breathtakingly steep mule trail as the route takes on a history lesson through small settlements layered by ancient levees packing the earth to the hillside. A small votive Chapel of Saint Rocco, once visited by a Pope, is a pivotal turnoff for the attack on the summit. Two and half-hours later a perch on the Piazza Martiri Bella Resistenza viewing platform at the 25 household Village is an eyrie of spectacular viewing. A memorial to the Partisans at the Church entry questions a sinister past and of course the mystery plaque reached out for an answer. 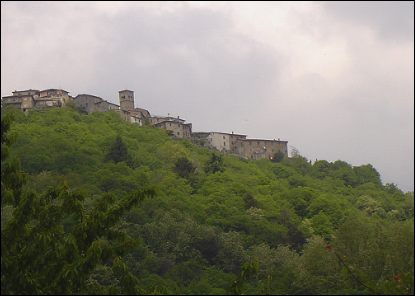 Enquiry in Barga tells a forgotten tale of the Gothic Line in WWII and the Negro Troops that defended the Sommocolonia Village. It was not until a villa restoration owner discovered a Sergeant Fox’s grave in the cemetery and investigated. The troops known as “Buffalo Soldiers” were the first Black Soldiers ever encountered in this remote area and they were sent to capture and defend this gunnery command post .The post controlled the whole valley and on Christmas Day 1944 the German Troops stormed the outpost and fought house to house in an overwhelming assault. Fox the Commander called his own artillery to coordinates of his position to fire and wipe him and all attackers out.

This undiscovered act of heroism lay dormant until the 1990s and President Clinton awarded 5 Congressional Medals of Honour posthumously. Since then the greatly reduced population of Sommocolonia has a special relationship with the USA.

The downhill trail from Sommocolonia heads across the hills on to the top of farms and terraces down to another small village of Albiano consisting of a hotel and café. The town had a busload of elderly trekkers whose major concern was an afternoon cuppa. The group was from around the world and was spending 2 weeks using this tiny village as a base to walk the Garfagnana at their pace. The mule path back to the Castelvecchio Road leads past an old watermill and into the leafy avenues of new town Barga. All up this entire trek is a 6-hour sojourn with a campari soda and foccaccia break at Albiano needed to replace the electrolytes.

Tuscan Cuchina Rustica is alive and well with plenty of family owned cafes poked into every cranny in the old town. The establishments in the new town seemed more up market and small tourist shops were interspersed. Surprises came in the least likely places with a World Series trippa alla Fioretina (Florentine Tripe) at L’Altana Trattoria situated at the Barga village gates. Bookings in May were essential and many local folk were spied chattering well into the night.

Local produce is in abundance with rabbit and wild boar able to be procured readily and provedoring heaven ,plus our backgrounds as Chefs ingratiated the tourist presence into the cobbled alleyways. The apartment reeked of sugo and garlic causing the villagers to comment on the porcini Toscana chianna ragu wafting directly onto the sidewalk. 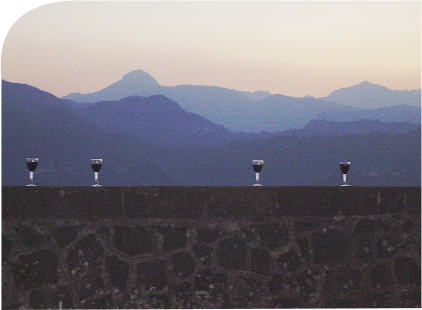 A wander into the piazza Angelio to hopefully catch the practicing mezzo-soprano leads to a chance meeting with Birgit a German Woman. She alerts me to the fact as a German singer she is going to a private lesson at the Conservatorium with an Italian Tutor for lessons in French Opera. The vagaries of the unknown Verdi-go-round are a singer must retrain her voice to supplement age changes in maintaining capacity.

Evidently French becomes the medium; Italy the cost Centre at a subsidised E20 per hour and Barga becomes the environment.

Apartment living in small villages slows down the soul and initiates the psyche into the Italian idyll. The apt explanation of the legendary “pisolino” or leisurely lunch at 1.00 followed by a nap until 4 and work until 7.00 needs amplifying for non Italians. This is a circadian brain rhythm structure as the body clock slows down at 2.00 and revs up again at 4.00. The Romans took a break on the sextus or 6th hour of sunshine then rested in doors due to the danger from lurking ghosts. Hence the siesta.

Oh to have the Australian predilection for having a good time infused into the need for a siesta and the ultimate lifestyle would be possible.

The long twilight and a glass of wine inveigle the diner into the Duomo forecourt to look over the Garfagnana at dusk.

The ease of slipping into village lifestyle can be readily accomplished but at least 7 days stay is necessary to settle the soul and massage the psyche. One gets use to walking a small plastic bag of rubbish to the corner of the steep street for a nightly pickup. 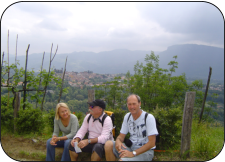 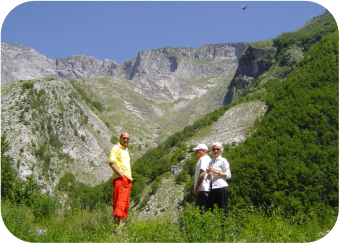